This is the second blog post of the three-part series – The Marks of Wisdom and What They Mean.

If you haven’t read the first blog in this series, I strongly recommend you read it first.

Lines between the eyes usually appear in the early to mid-30s and are frequently the first lines we notice on our own faces as well as on others. In Mien Shiang, we call this area the Seat of the Stamp, or Yin Tong, and issues with the father or the dominant parental figure are marked here. 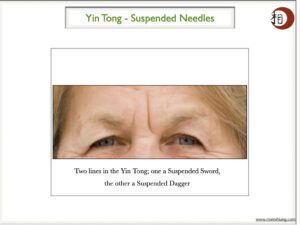 For more information on the Seat of the Stamp or Yin Tong, its impact on an individual, and how to address it email me at Patrician@mienshiang.com